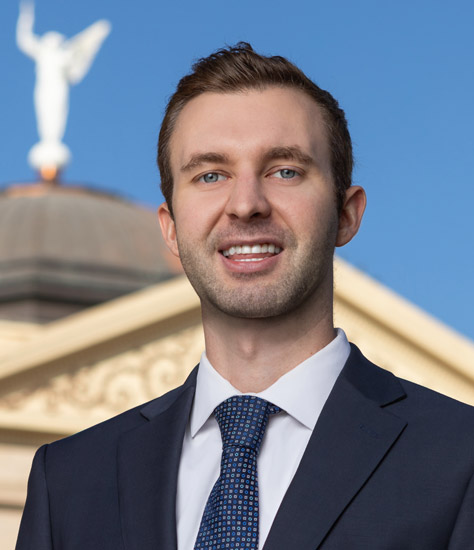 Mark Fitzgerald graduated with a B.S. from the University of Arizona where he majored in Public Management and Policy and minored in Business Administration.

A California native, Fitzgerald entered the Arizona political arena working for Congresswoman now United States Senator Martha McSally and following that, in the Arizona House of Representatives. In 2018, Fitzgerald began a mentorship with former US Ambassador to Finland now United States Secretary of the Air Force Barbara Barrett. While working for Secretary Barrett, he researched and provided recommendations on policy matters including Education for Seapower – a system of naval education and the Secretary of Navy’s study of Naval and Marine Corps education.

Following Fitzgerald’s mentorship with Secretary Barrett, he transitioned to the Arizona Chamber of Commerce where he served as a Research Associate. At the Chamber, he counseled members on international trade and development matters for accelerated investment within Arizona. His work entailed collaboration with representatives of federal and state agencies with whom he developed solid relationships.

Fitzgerald joined the AGA team in January 2020. Mark assists with all aspects of legislative matters on behalf of AGA’s clients. He communicates daily with AGA clients, keeping clients apprised of every legislative amendment and all relevant committee hearings.